I was recently asked if dad and I’s relationship had changed for the better since starting the build.  It has.  This is, perhaps, the best and most unexpected advantage so far.  We didn’t have a bad relationship before but we weren’t as close as we could be.  My brother was interested in the same things as my dad, so they helped each other out with their projects and had a lot to talk about.  Mom is one of my best friends, so I never felt like I was missing out or lacking in that area.

On dad and I’s first trip to Home Depot, I remember being nervous thinking how awkward it was going to be sitting in a truck with him for 20 minutes with nothing to talk about (mom’s usually the one who keeps the conversation going).  Turns out it wasn’t so awkward, as we had the house to talk about and, over the subsequent trips, we branched out into talking about everything under the sun.

It’s not always easy working together, as I am very stubborn and he is used to building a certain way, but we usually work things out.  I usually see the logic in what he suggests, sometimes only after I’ve tried it my way and failed…  To his credit, he has allowed me to introduce new ideas and we’ve learned together.  He has also learned to relinquish control and let me do things on my own (not an easy thing for people in our family to do).  This is usually due to time or physical limitations on his part but lately I think it’s because he’s beginning to trust my capabilities.  To this, I throw back his well-worn phrase, “we’re not building a piano.”

I was surprised recently when someone asked what made me think I could build a house, like it was an unusual thing to attempt without any knowledge or skills.  That got me thinking about other things I’ve done in my life and it made me realize I’ve always felt that I could do anything I set my mind to without fear of failure.  I’m not saying I haven’t failed in life, I have many many times, but it doesn’t hold me back from trying something new.  I attribute this to all the strong people in my family, dad being chief example.  He has the mind of an engineer and has always figured out a way to make whatever he has needed.  I believe that mindset shaped my brother’s and I’s lives the most.

In closing…  Thank you, dad, for giving your time, which I know is priceless, and for being so patient.  I’ve thoroughly enjoyed getting to know you.  Happy Birthday!

Earlier in the week dad and I put the tires back on.  They are not in the best shape and that was my biggest worry for the move.  We had to shuffle the order around because a couple of the tires rubbed on the floor joists.  If/when I move or sell the house I would definitely replace the tires and probably even the axles.

Shoveling the slab for the last time.  Dad had me make the truncated-pyramidal blocks to go over the eye hooks on the slab so we wouldn’t blow a tire.

Our friend, Gary, came over with his tractor with a hitch ball mounted on the front loader.  The tractor did most of the towing, alternating between the front and back hitches.  We used dad’s plow truck and chain to help pull the tractor when the traction wasn’t so good.  We also used the chain around the front of the loader, hooked to the trailer hitch, and Gary maneuvered it to make small adjustments so we could line up the edges of the house with the edges of the slab.

Ken came back to help.  I thought the sheetrocking might have been enough to scare him off but he dared to come back!  It was a big help having someone there who knew the appropriate hand signals to give Gary so he wouldn’t have to guess at my miming skills.

A. Kelly was there to help document the move, which worked out well since mom’s camera battery died.  A. Kelly got about an hour’s worth of footage and I edited it down to only include actual movement of the house and then I sped it up to 4x the original speed.  There was a lot of hard work and running around that I left out of the movie for the sake of time.

U. Les doing some heavy lifting.

Is this really happening? 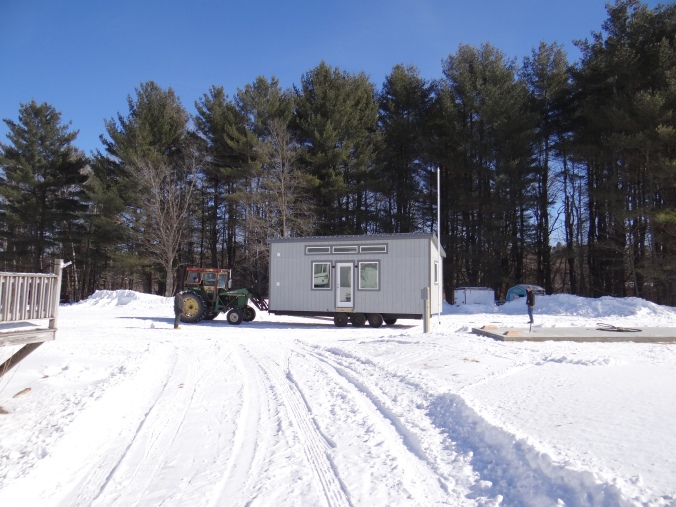 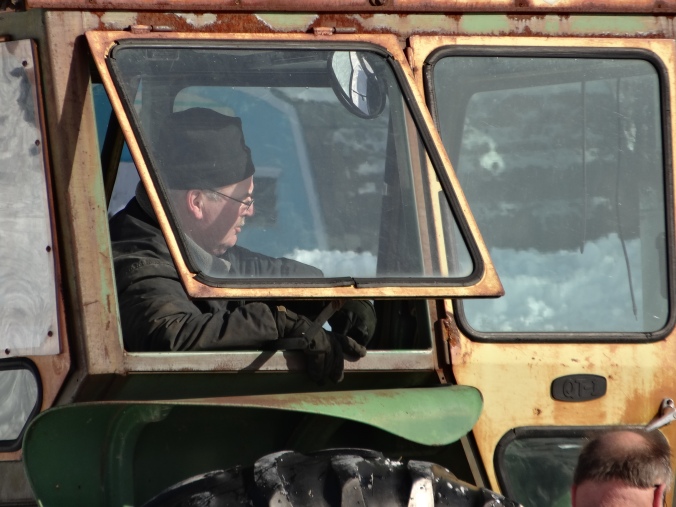 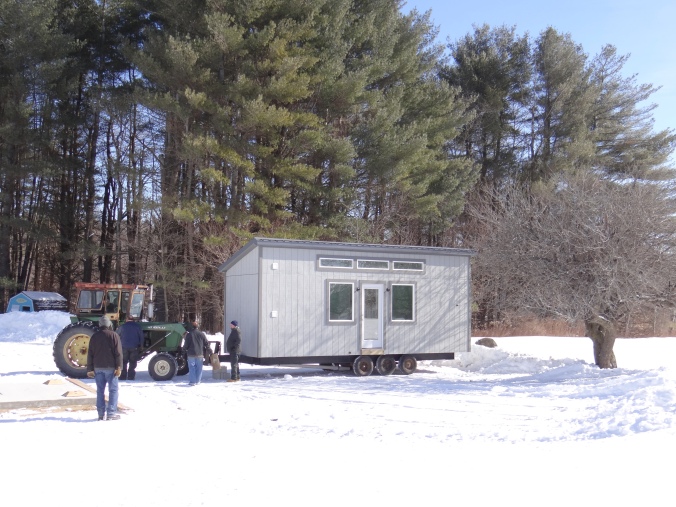 Who put that tree there? 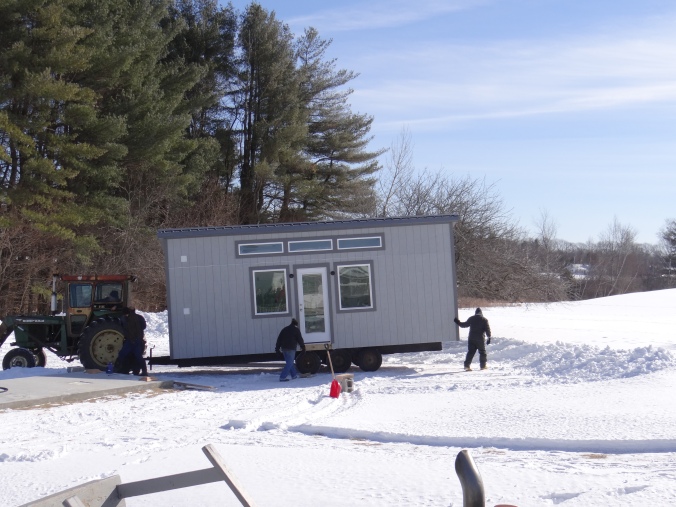 My brother, Mike, arrived with two of his friends at just the right time.  He thought our 9-degree weather was downright tropical compared to the -14 he left up north. 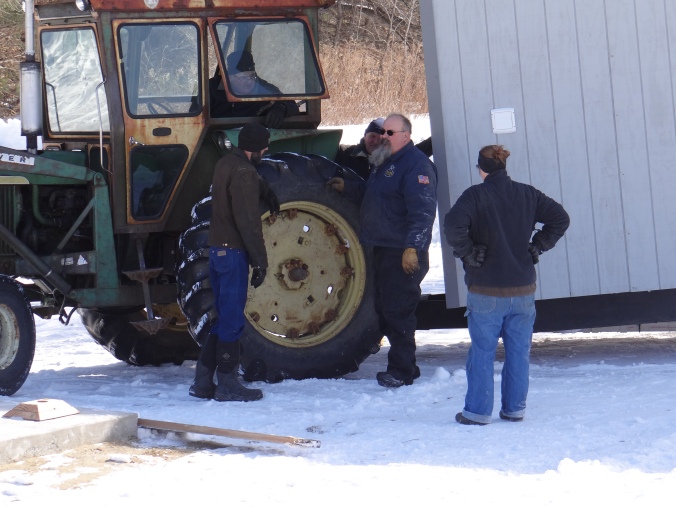 Nancy and the safety supervisor watching from the window.  Maybe she got an indoor pass due to her Californitis…?  :oP 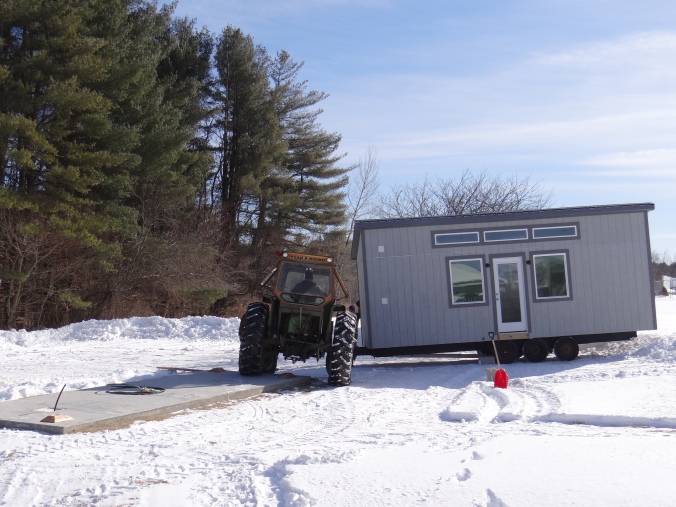 Drain pipe too close for comfort. 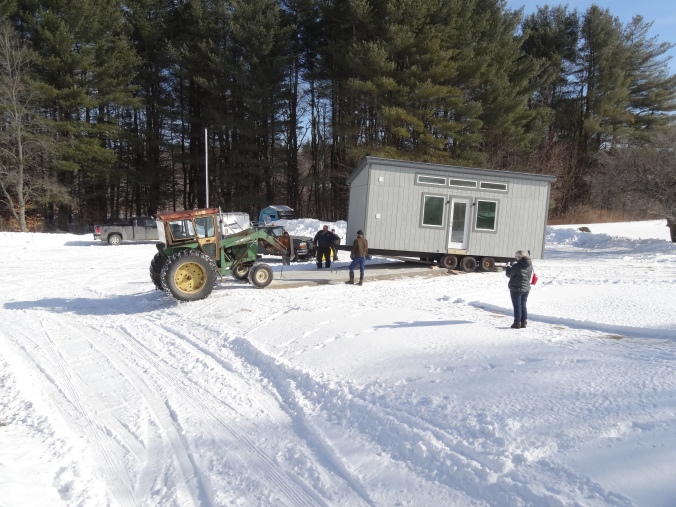 A. Kelly taking a movie. 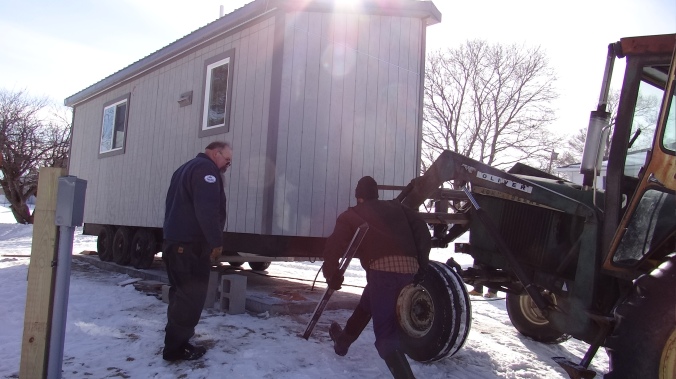 I just liked this action shot.

A feast for the cold and weary!  Subs courtesy of Carol Lee and donuts from A. Kelly.

All in all, it took about 2-1/2 hours to get the house situated.  All of the drywall survived with no damage.  I left my toolbox, the space heater, and water heater in the house during the move and they didn’t tip over!  Surprisingly, all of the tires stayed intact.  We’ve since taken them off so we can insulate and skirt around the bottom of the house.  The trailer frame is supported by 2 cinder blocks topped with a 2 x 12 x 12″ board at 8 points around the trailer.  It is secured to the slab with 4 turnbuckles, from the eye bolts in the slab to the U-bolts in the trailer frame (I’ll get a picture of them for the next post).  Next up is flashing and skirting the underside and taping the drywall.

Thanks, again, to all who gave their time and support! 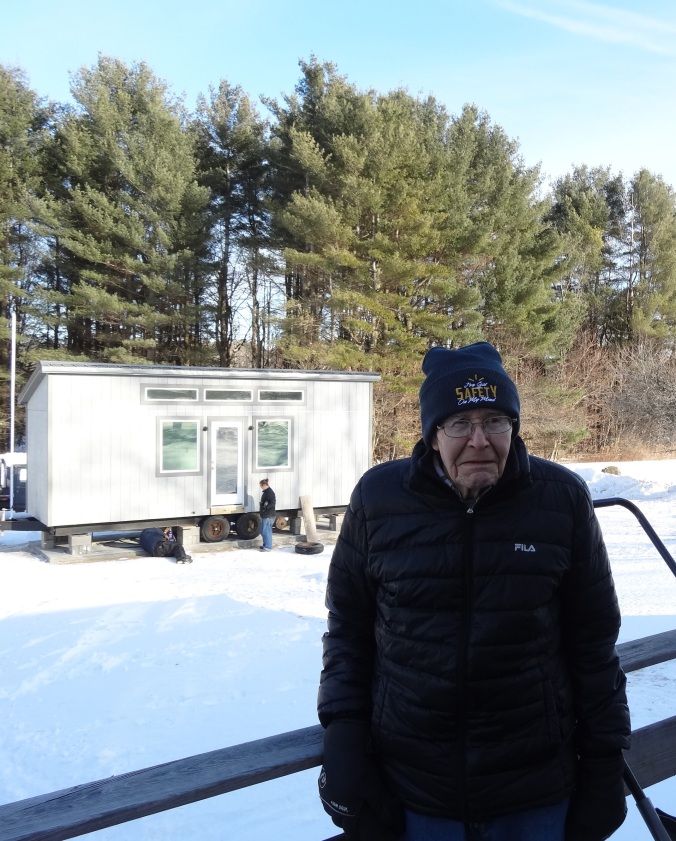 The safety supervisor approves this move.

The installation instructions for the shower base said to install it in a bed of thinset.  This did not match up with dad’s installation plan so we called our cousin, who knows about such things, to get his advice.  He said it would take about a month for the thinset to harden and, instead, suggested we use construction adhesive or silicone under the base and screw the lip to the studs.  Another cousin o’ mine and his wife visited for the weekend and I ran it by him, whether he would use adhesive or silicone, and he said he would go with silicone.  His wife, trying to shine an objective light on the subject, hinted that he may have an unnatural predilection for silicone that bordered on obsessive…  Neuroses aside, silicone did seem like the better choice.

Dad and I liberally applied silicone around the support rings on the bottom of the base and then emptied 2 tubes of silicone inside the circles for good measure.  We then countersunk stainless steel screws in the lip of the base to the studs.  We were a little worried afterward because there was a lot of flex in the base and a bit of a gap between the floor.

We installed DensShield tile backer board over the lip of the shower base on both sides.  I had bought more green board (mold- and moisture-resistant drywall) than we needed so we used it wherever it fit.

It turns out I’m not so horrible at using the screw gun…  the screws I had bought were too long and almost impossible to set perfectly.  I swapped them out for shorter ones and took over the job of screwing while dad did the cutting, which went much faster.  It took us about 2 days to install the shower base and drywall the rest of the house. 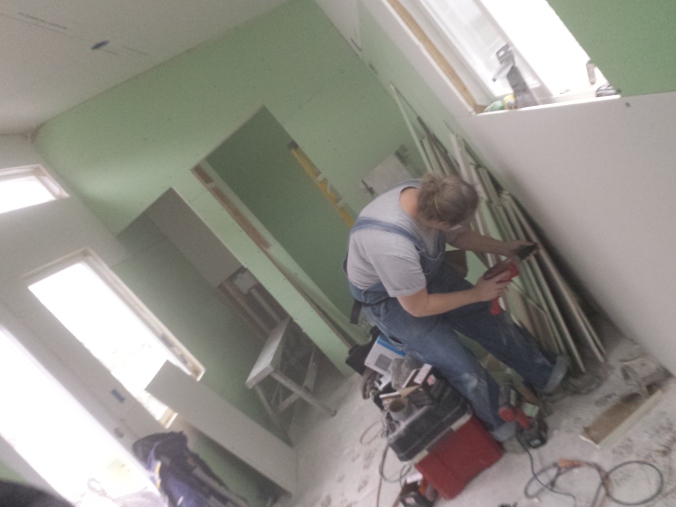 Apparently, the blogtographer was having an off day… 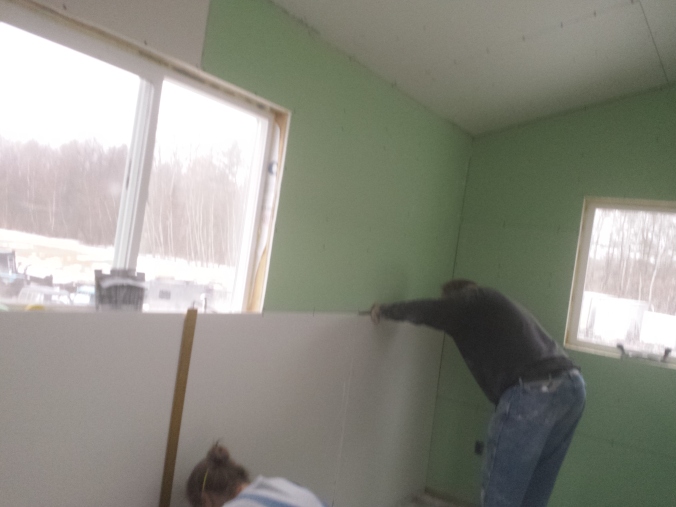 I ended up having to take the sheetrock out of the closet so I could shim the back wall another half an inch because the PEX that went around the corner to the washing machine hookups was jutting out and in the way. 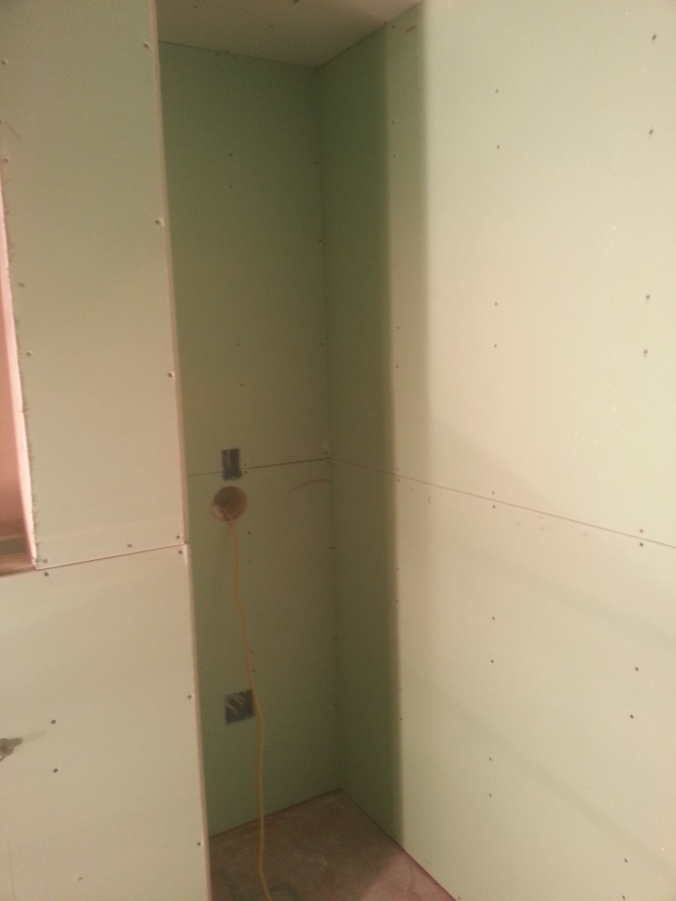 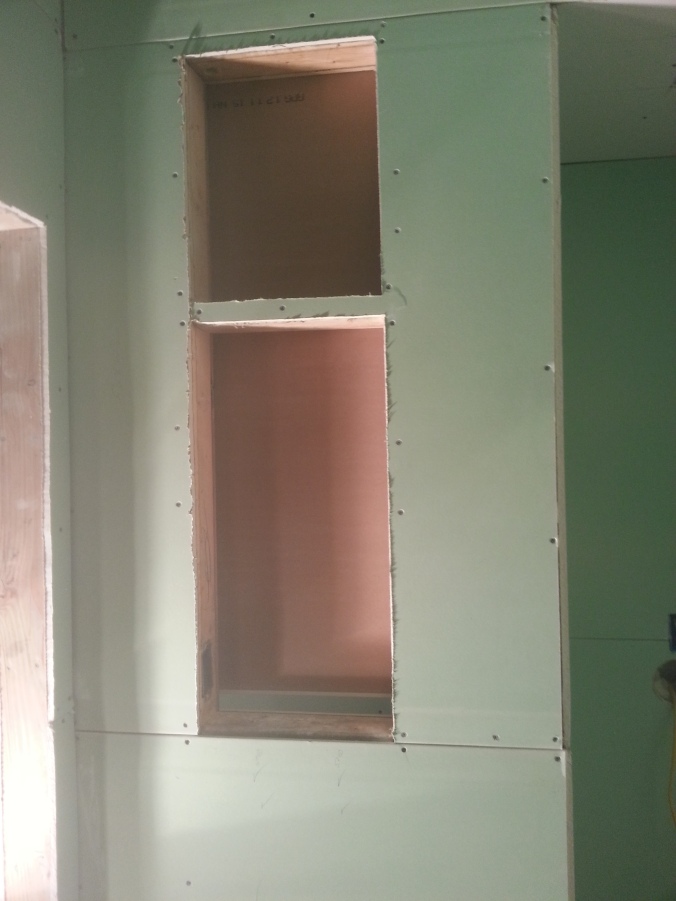 Openings for medicine cabinet and cupboard.

After we had most of the drywall done, we realized we had forgotten to install the shower drain before we set the base.  We both felt like idiots.  Dad had even asked if I had the drain on hand to see if it lined up, but neither of us thought about how the drain has two parts and that one of them screws onto the bottom of the shower, before we secured it in place.  I thought maybe I could slip the ring between the pipe and base from underneath the trailer but the hole was in the area of the triangular braces at the front corners of my trailer and too small a space to maneuver anything.  While I was under the trailer I wrapped the shower trap with pipe insulation.  Since my first plan didn’t work, I thought maybe I could take the tile board off and unscrew the base and, perhaps, pry it up…  We never should have worried about the base not being tight to the floor…  there’s no way of budging the base now, it’s solid.  So, I put the screws and sheetrock back up.  Luckily I found this nifty little product, WingTite Shower Drain, where I can install the drain from above.

I’ve been told I could heat the house with a match, a lighter, a candle, a light bulb, etc…  I don’t know if any of those would actually work but this little space heater has been doing an excellent job.  I keep it set to 55 degrees and it is quite comfortable, even with all the vent openings not sealed yet.

We are scheduled to move the house to the slab at the end of the week.  We could have moved it last week but it was too warm and muddy to drive out back, very strange for February in Maine.